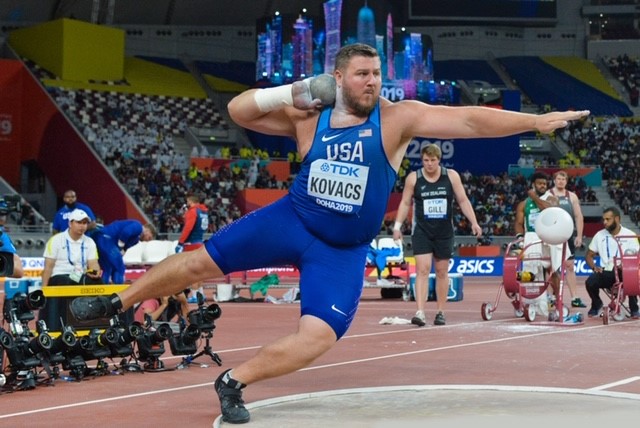 In a much-anticipated rematch following the greatest shot put competition ever, world champion Joe Kovacs and world silver medalist Ryan Crouser will go head-to-head in the Doha for the opening of the Wanda Diamond League on 17 April at the Qatar Sports Club.

Kovacs, also world champion in Beijing 2015 and runner up in London 2017, is an Olympic silver medalist with a lifetime best of 22.91m.

Crouser, who won the Doha Diamond League shot put in 2019, is defending Olympic champion with a lifetime best of 22.90m.

The American pair, who were separated by only one centimetre at the 2019 World Athletics Championships in Doha, made history in an extraordinary final which produced three of the seven best throws ever.

Joe Kovacs said: “Last year’s World Athletics Championships final was unbelievable, and unforgettable. The depth of competition was incredible, and I hope that we can continue that momentum through 2020.

“I’m excited to be opening my Wanda Diamond League season in Doha, especially alongside Ryan. With such a strong group of athletes we can really motivate one another in this Olympic year.”

Ryan Crouser added: “I finished my year off on a high with 22.90m at the World Championships and I hope that I can build on that in the early part of the summer season, especially after a solid opener of 22.60m at the US Indoors.

“It’s important to build confidence and consistency at this time of year and I’m looking forward to going head-to-head with Joe in Doha. Similar to what’s happening in the pole vault this year, I’m sure we can bring the best out of one another.”

For the first time in its 22-year history, the Wanda Diamond League in Doha will be held over two days across two different venues. The Qatar Sports Club will host the main programme, but in an innovative development, the men’s high jump – featuring world champion Mutaz Barshim – will take place at the Amphitheatre of the Katara Cultural Village on the evening of 16 April.

The 2020 Wanda Diamond League comprises 14 meetings - commencing with Doha - leading to a single final at the end of the season. Each meeting will be broadcast globally in a fast-paced 90-minute programme.

Tickets for the Doha Diamond League are available at: https://www.q-tickets.com/iaaf/eventdetails.aspx?k1=bmuk7ZHWVwY=