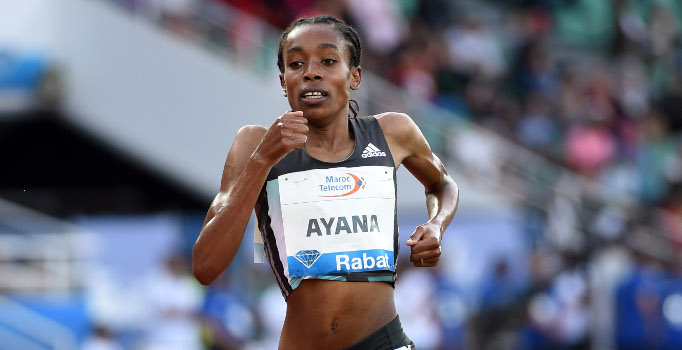 The world champion from Ethiopia will chase another important time to add to her collection at the Rome Olympic Stadium on 2nd June.

The most threatened barrier was broken by Gunder Hagg, who clocked 13:58.2 in Gothenburg in 1942. The performance can be within the reach, in the rhythm and in the pencil-thin legs of Almaz Ayana, the lightweight runner from the Province of Benishangul Gumuz in the western part of Ethiopia, a Muslim-majority region near the border with Sudan. It’s a mountain region, but it doesn’t reach the height of the highland where Haile Gebrselassie, Kenenisa Bekele and the Dibaba’s sisters were born and grew up. Its capital Asosa is located at 1570 meters of altitude.

After the Rabat race Almaz holds two of the five fastest times in history with 14:14.32 set in Shanghai last year and 14-16.31 set at the Mohamed VI Stadium in Rabat. Tirunesh Dibaba ran three seconds and a few hundreds of a second faster than Ayana with 14:11.15 at the Bislett Stadium in 2008 in the race where all three formidable Dibaba’s sisters ran. Eyegayehu finished third in 14:36.78 and a 17-year-old Genzebe crossed the finish-line in seventh place in 15.02.41. The beautiful and elegant Genzebe tasted the fierce pace set by Ayana. In the final of the World Championships in Beijing Genzebe was bidding to score a 1500m-5000m double achieved only by Paavo Nurmi and Hicham El Guerrouj at the Olympic Games and by Bernard Lagat at the World Championships. Her goal was dashed by this thin runner who clocked 14:26 (this was rated as the most brilliant performance at this edition of the  World Championships in the Bird’s Nest). She ran the final 3 km under 8:20, a sort of flying personal record, which was at the same level as the final 800m clocked in 1:57 by Genzebe in the 1500m. Dibaba had to surrender to this breathtaking pace, which disrupts the heartbeat. She is not a friend of Almaz but congratulates with her. She knows that a re-match was planned a few days after on the Zurich track over the 3000m distance where she set an impressive world indoor record clocking 8:16.60. However, she was beaten even on this occasion. Almaz broke away from Genzebe at the bell and went on to destroy her opposition. She clocked 8:22.34 missing her personal record by 12 hundredths of a second. Almaz started to be a serious rival to Genzebe at the 2014 African Championships in Marrakesh when she crushed her with a ruthless progressive race in a 5000m race which started at a slow pace.

Twenty-four year-old Almaz Ayana started her career as a steeplechaser. She finished fifth at the 2010 World Junior Championships in Moncton and set the world junior record with 9:22.51 in Brussels. Two years later she focused on the 5000m and dipped under the 15 minutes barrier by three seconds. She produced an impressive improvement at the Paris meeting in 2013, when she smashed her personal best with 14:25.84 and went on to finish third at the Moscow World Championships behind Meseret Defar and Mercy Cherono.

To prepare the attack to the world record, the organizers will face the difficult task to ensure Almaz a couple of pacemakers who don’t leave Ayana too early after the first mile, as happened in Rabat. In any case, the thin woman was able to reach the 3000m in 8:32 and run a split between the 2000m and the 5000m in 8:36. It will not be easy, but the barrier just waits to be broken and Almaz is the first candidate to achieve this feat.