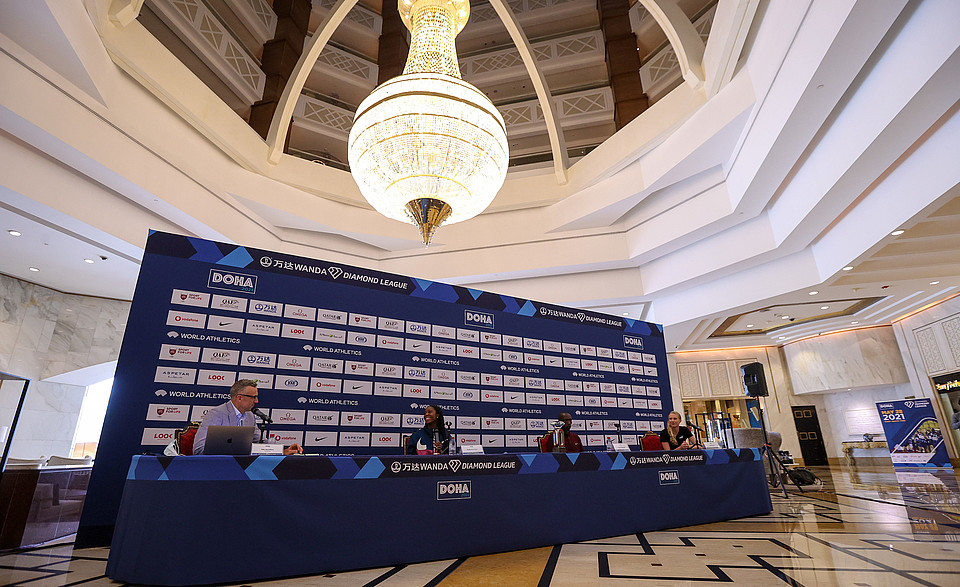 The stage is set for another exciting time of athletics as the world's top athletes converge on the Qatar Sports Club, the traditional home of athletics in Qatar, tomorrow (May 28) for the 2021 Wanda Diamond League Doha.

The year's event features more than 200 athletes, including 12 reigning world champions and several national and world record holders.
The Doha leg is the second stop in the 14-cities meeting, following the season-opening event held last Sunday in Gateshead, North East of England.
The no-spectator competition is being held under the safest conditions and in strict adherence to the health and safety protocols stipulated by the relevant health authorities with all the participants, including more than 100 technical and medical personnel and escorts in a bio-bubble system.
Among the unprecedented number of superstars on parade at this year's event are reigning men's high jump world champion Mutaz Barshim, Jamaica's Shelly-Ann Fraser-Pryce, two-time Olympic champion and reigning women's 100m world champion; Beatrice Chepkoech (Kenya), the reigning world champion and world record holder in women's 3000m steeplechase. Also on the cards are 1500m world champion Timothy Cheruiyot of Kenya, Russia's Anzhelika Sidorova, the reigning pole vault world champion who won the title in a lifetime best of 4.95m.
Representing the home-front, alongside Barshim, are 17 of Qatar's best athletes, including Abderrahman Samba, the World Championship's 400mH bronze medalist, and world-leading 1500m star Musaab Ali Adam, who recently qualified for the Tokyo Olympics. Adam will be competing alongside compatriots Hamza Driouch and Mohammed Al Garni. Also on the list is Olympics-bound Abdulrahman Saeed Hassan and the sibling duo of Femi and Seun Ogunode (100m), among others.
Addressing a press conference on Thursday, Barshim, who made his debut at the competition in 2011, said he looks forward to making the event memorable with his performance.
"It's been two years since I last competed in the Diamond League in Doha, and I am excited to be back. Doha is where it all started for me, and I'm always happy to compete here in front of my people. It is always special competing at home as I'm more motivated."
Barshim, who recently became a proud father, revealed that his life-long dream is to cement his legacy in the high jump to the extent that when people mentioned high jump in the future, the name Mutaz Barshim will be on everyone's lips.
"I am someone who is not easily satisfied, and I keep pushing myself as I've lots of personal goals I want to achieve. Before I retire, I want to say I've achieved all my goals. This is what drives me and keep me going," he added.
On breaking the existing 2.45m world record, Barshim said, "Nothing is impossible. The most important thing for an athlete is remaining motivated, being in good health, and staying focused. Records will come if and when they will come as you cannot set a time for records. Who knows, I might not only jump 2.45m but probably 2.47m as well because I believe impossibility is Nothing."
Also in attendance at the media meet were his compatriot Samba, USA's Rai Benjamin, the World Championship's 400mH silver medalist, Fraser-Pryce, Cheruiyot, and Sandi Morris, Rio 2016 and 2019 World Championship silver medalist in pole vault.

My dream is to become among the world's greatest, says Benjamin
For Benjamin, who is visiting Doha for the second time after his maiden visit in 2019, one of his dreams is to be ranked among the world's greatest athletes when he retires, and he sees the Tokyo Olympics as another opportunity in that direction.
"I want to be remembered as one of the most versatile athletes the world has ever seen. There is a lot of pressure on athletes at the moment, and as it is now, it might get to a point where running sub 47 or even 46 might not be enough again because the competition is getting tougher by the day. I intend to keep improving myself and hopefully go into the record books in Tokyo," he said.
Benjamin, alongside Samba, is the joint third-fastest man in history in the 400 m hurdles with a personal best time of 46.98 secs, noting that breaking Kevin Young's 29-year-old world record of 46.78 secs is going to take a lot of time. "I don't feel pressured, and I believe it could happen, but I am not overthinking about it. It will happen with time," he said.

I'm pushing myself to do better than my world championships record in Tokyo: Samba
"Winning the bronze medal at the last world championships is not enough, and Tokyo presents another opportunity to improve on my last outing on the global stage," said Samba, who is one of the major revelations in athletics in recent years.
The 25-year-old, who is the second person to run the 400m hurdle event in less than 47 seconds, has had phenomenal career growth since he first caught the world's eyes after winning the 400 m hurdles at the 2017 Diamond League Doha, beating Olympic champion Kerron Clement.
"I'm pushing hard to improve on my performance in Tokyo. I am focused on giving my best performance, and I'm keeping an eye on the medal podium. It is always great to compete here in Doha, and I hope to have a wonderful outing on Friday. I am in better shape than in 2019, and I believe things are looking good. My training is going on well, and it is so far so good," he added.

Running below 10.70secs is my big dream in Tokyo:  Fraser-Pryce
According to Fraser-Pryce, a two-time Olympic champion in 100m, running below 10.70 secs is her major dream for the Tokyo Olympics.
"I'll be happy to be on the podium, but to be honest, I am more interested in running sub 10.70. It is something I am working hard towards it. To have both will be quite interesting but running below 10.70 is my top priority," said the 34-year-old Jamaican, who won her fourth world 100m title in 2019 after two years away from the sport to have her son Zyon.
She noted that motherhood had been one of the greatest things to ever happen to her as it has changed many things about her and has further enhanced her personality.
"I feel more responsible as I take up the responsibility of modelling and nurturing life while helping to maximize his potentials. I now look forward to going home more than before, and It is a role I am enjoying."
"Though it has not been easy with the pandemic, but I believe I am gradually getting back to top-form. I am ready to give tomorrow's event my best shot, and I hope it turns out well," said Fraser-Pryce.

Happy to be back in Doha: Cheruiyot
World champion Cheruiyot has a 1500m best of 3:28.41 from 2018, said he is happy to be back in Doha - the city where he struck gold at the World Championships in 2019.
"I've always loved competing in Doha, and I look forward to another victory tomorrow," he said.
Cheruiyot, who is one of the top contenders for Olympic gold in Tokyo, admitted that the pandemic massively disrupted his previous plans for Tokyo, but he has learnt to adjust and gradually getting back into shape.
On his plans for Tokyo, the Kenyan said his focus is to be in top shape and make it to the Games.
"1,500m is increasingly becoming very competitive with lots of great athletes like Tefera (Samuel), Ingebrigtsen (Jakob) and the rest involved. I have to remain in top shape and keep my focus to achieve something significant here and in Tokyo," he added.

The 2021 Wanda Diamond League comprises 14 meetings - starting with Gateshead (replacing Rabat as the first host city on this year's circuit) on Sunday, May 23 - leading to a single final across two days in Zurich at the end of the season. Each meeting will be broadcast globally in a live two-hour programme.